Josie Junebug has yet to be exposed to any Star Wars. Still, she’s not going to be a natural fan. “Why,” you ask? “Blasphemy” you declare! “But she’s otherwise the world’s best dog,” you lament. Let me explain; if Miss JJ knew about the impending Episode Seven release, she would not be amused because it means her family will abandon her for several hours in order to go sit in the dark and remark about how wonderful something else is. Though it gives her no reprieve from kennel time, I dedicate this Star Wars themed post, in which I analyze what characters our family would be, to her. 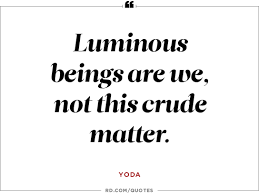 Starting in no particular order, my son would be R2D2, and not just because he’s the smallest. He has a good heart but is notoriously spunky and stubborn. For a long while, what he said could only be interpreted by his sister. As with most toddlers, communications relied heavily on gestures, using Force empathy, and attempting random solutions.

Master of human/cyborg (toddler) relations, my daughter probably wouldn’t be flattered by the comparison but she would be C-3PO. She constantly has to corral her brother, who antagonizes her endlessly but comes off adorable to the audience. 3PO’s physical build reflects her figurative heart of gold. Being a first born protocol droid, she is always anxious to do the right thing.

My husband is Obi-Wan. He is the oldest of us all (though not white-headed yet), a good negotiator, and the most emotionally stable one of the bunch. His serene wisdom guides us through the chaotic energies the rest of us unleash as we slide the warp drive accelerator into uncharted systems, expressing our zeal for life.

I was surprised to discover that my Star Wars alter-ego is Han Solo. We’re both cocky wisecrackers with adventurous spirits  who aren’t afraid to shoot first. Also, both of us think the best place to do business is a trendy local pub

Josie Junebug would be Chewbacca. Obviously,  they’re both covered in fur and roughly the same color. Their big size intimidates people, though they’re just teddy bears. Communicating with humans can be a challenge, but they’re loyal and always seem able to intuit what we need.

The cats are jawas. They have glowing eyes, no one understands them, and when they grace us with their presence, its for no apparent reason other than to be mysteriously adorable.

R2D2, May the Force be With you

* Fun fact, one of the names we considered for our new dog was Jedi!

Leave a comment about what Star Wars character you would be and why.

This article was originally written as a professional article for my LinkedIn profile:

As part of our family, many of us include our pets in our Holiday Gift-Giving. I had to run to Pet Smart on Black Friday to exchange a collar for our new dog, and the long lines at every checkout seem to confirm that getting Rover a giant rawhide is as important as Grandma’s new crockpot. Depending on what poll you cite, up to 95% of pet owners say they buy presents for their dog or cat.

Getting a gift for your pet may mean a special trip to the pet store, or a toss-in item to your cart at Target or Amazon. If you’re looking for something that’s just right, here are some suggestions from the Environmental Enrichment Coordinator:

K9 Ballistics Crate & Kennel Bed: Saying anything is “chew proof” is just begging to be disproved. However, these beds have excellent customer ratings. For those with dogs determined to be epic chewers, the company seems to stand strong behind its 90 day guarantee. They’re a bit pricey, but surely worth it if you’ve finally found the bed your dog won’t chew through; also, shipping is free.

Freedom Tails Handmade Collars and Leashes: For those seeking to give gifts with a higher purpose, this may be the solution for you. Inmates at Stafford Creek Corrections Center in Washington State create leather collars and leashes that can be custom-embossed with a pet’s name.

Thanks to The Bark for sniffing out this terrific opportunity in their article found at http://thebark.com/content/gifts-give-back : “Proceeds support Freedom Tails, a program where offenders train shelter dogs to make them more viable for adoption. The dogs get a second chance at a life in a loving home, and the offenders receive a renewed sense of purpose. Contact dennis.cherry@doc.wa.gov or baushaus@coastaccess.com for pricing and information. Collars start at $15, leashes start at $20.”

Bark Box: If you’re searching to spoil your dog with a gift that gives year-round, go no further than the Bark Box. This delivered-to-your-door subscription service will surprise you and your canine companion with “4-5 healthy treats and pawsome playthings, plus one extra bow-wow worthy premium toy.” Savvy Google searchers may be able to score a promo code to save a little dough.

My personal favorites: In my role at the University, I’ve discovered Otto Environmental as a great source for every species, from mice to elephants. (No, I don’t shop for elephants; I’m just saying—they got it.) I send in an order through work, and when I find things I like, I order for my own pets. I can personally attest to the fun and durability of the Crackle Ball and Fire Hose Squeak N Fetch. The Tunnel-O-Fun was both adorable and loved by our pet mice. Finally Kookamunga Catnip Bubbles are an awesome way to bond with your cat.